History of Our Organization

White Lake Ambulance Authority was formed on January 1, 1968 by seven governmental units, these being; The Cities of Whitehall and Montague, The Townships of Blue Lake, Fruitland, Montague, Whitehall and White River. The Village of Lakewood Club joined in 1988 and succeeded in 1998. Prior to The Authority ambulance service was provided by Purdy and Gee Funeral Homes.

According to an article in the October 26, 1967 edition of The White Laker, Ambulance due to rising cost, increased state restrictions and operating standards it has become running an ambulance a losing venture for both funeral homes. The cities and townships were notified that the funeral home based ambulance service would end December 31, 1967. A committee of representatives of each of the seven governmental units in the coverage area was formed. Following numerous community meetings, the committee revealed plans for a volunteer ambulance service. 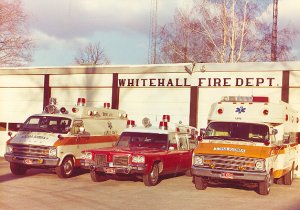 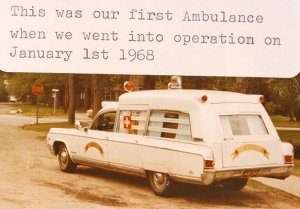 A fund of approximately 3000.00 was established with the governmental units each contributing their portion based on population. From this fund, a four-year-old ambulance was purchased. Twenty interested citizens signed up to be drivers and attendants. Training at the time was American Red Cross CPR and First Aid. In 1974 twelve of the attendants received training and became licensed by the state as Emergency Medical Technicians. Through the late 1970s, the calls for response increased and so did the education to provide the most up-to-date techniques and care. In 1977, with the graduation and licensing of six Advanced EMTs (modern-day paramedics) from Grand Valley State College, White Lake Ambulance Service became one of the first volunteer advanced life support ambulance services in The State of Michigan.

In 2016 the City of Whitehall and Fruitland Township left the Authority and contracted with another ALS service out of Muskegon. White Lake Ambulance went through many changes in the following years. Board members were changed, a new director was hired and a billing agency was contracted to do outside billing. These changes were all necessary to make WLAA more transparent and build a check and balance system that could be trusted by the citizens. The service had become too large to have all the complicated processes done in-house. An accountant was brought in, she now manages the day-to-day financial portion of the business. An EMS supervisor was added, and the EMS staff was increased. The business quickly recovered from the negative position it was in. The following years audits started to prove this, and it was clear that White Lake Ambulance could not only survive but flourish. Each year the ambulance showed improvement, growth, and financial promise. White Lake currently supports the neighboring communities under mutual aid and is able to provide non-emergency transfers and stand-by services for other ambulance agencies.

White Lake Ambulance Authority currently provides four ALS ambulances and a mass casualty trailer to protect the citizens in 5 municipalities: Blue Lake Township, City of Montague, Montague Township, Whitehall Township and White River Township. Two of these ambulances are staffed around the clock 24 hours a day, 7 days a week, 365 days a year. The other two units are staffed on an as-needed basis. The total call volume has been showing an increase each year.

Advanced Life Support (ALS) means the ambulance has a paramedic on board, along with an Emergency Medical Technician. The ambulance is equipped with airway support equipment, cardiac life support, cardiac monitors as well as a glucose-testing device. The ALS ambulance also carries medications onboard. The patients in an ALS ambulance require a higher level of medical monitoring and include those who need IV drip, medications, and those who require cardiac monitoring.  The paramedics and EMTs who staff the advance life support ambulances have a higher level of training than those who operate the basic life support ambulances. Due to their advanced training, ALS ambulance personnel are allowed to start IVs, administer medications, and give injections to help stabilize the patient while transporting to the Emergency Room.

White Lake Ambulance currently lease our two stations; they are both on a 5 year lease which have just been renewed. One station is at Montague Fire Dept and houses 2 ALS Ambulances.  The other station is in Whitehall Township and it also has 2 ALS ambulances, a E unit pickup truck and a mass causality trailer.  There is a crew of 2 EMS providers on duty at each station working 12 or 24 hour shifts. The call volume is divided in half and determined by the location of the emergency call.  Two station allows us to have the most efficient response times as possible and easily cover the other ambulance while on a call.